Six days after the 2016 presidential election wherein Donald “The Hammer” Trump won, and five days after Killery conceded the race to him, a local chapter of the Democratic Socialists of America, headed by Milton Tambor, projected a two-word phrase onto a high-rise hotel in Midtown Atlanta. As your Citizen Journalist, I read what I could find on the matter from the mainstream media, and found nothing useful. Therefore, I made calls and did research myself.

My first call was to the Crowne Plaza Midtown Atlanta’s general manager, Patrick Palmer. He returned my call saying the company was not happy that their building was used as a canvas for a political message, much less one that featured the ever-popular ubiquitous F word. He further told me that attorneys advised there was nothing to be done about it as it was a free speech matter. He disagreed, but he’s not in the business of fighting for Constitutional rights.

My next communication was to Milton Tambor via email. He confirmed it was he and his local chapter that pulled off the event. I said I’d like to interview him. He told me to watch the 5:00 and 6:00 news that evening as he would be interviewed. I did not want to see what MSM was going to do, and I, as Citizen Journalist, would love to interview him. Tambor called me and said he would agree to the interview as long as I understood he and the DSA were all about protest. I was fine with that and we agreed on doing the interview via email. Here is how far we got:

Angela: Mr. Tambor, I appreciate your willingness to be interviewed by this Citizen Journalist. You certainly got the attention of Atlanta, social media streams, and local news when you projected the properly punctuated “Fuck Trump.” phrase on the side of a building in downtown Atlanta. How did you come to choose the Crowne Plaza building? How long was the phrase up on the building? Were you asked to remove it? If yes, by whom? 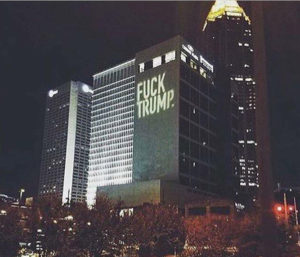 Milt: The Crown Hotel was chosen because it offered high visibility for pedestrians and motorists. The phrase was up for 30 minutes. A security guard came out to ask that we leave the location, which was promptly done.

Angela: The group you’re a member of is called the Democratic Socialists of America. Their site says their purpose is to “fight for reforms that empower working people.” How do you think you accomplished that with this latest direct action?

Milt: The message was intended to mobilize folks to stand up and fight back against the bigotry and racism that Trumps’ campaign has been based on. DSA stands on the side of immigrants, Latinos, women, African Americans, and the LGBTQ community.

Since Trump opposes these reforms. Those of us who want these changes will need to protest and resist when current protections are threatened. We have seen much positive feedback on social media from the latest direct action. We are also witnessing a surge in our membership particularly from young people.

Angela: Obviously, you’re aware many do not agree with your vision, otherwise there would be no need for direct action to get your message across. When I saw your message being projected onto a building, my first thought was to wonder if the company agreed with it. I spoke with the GM there who said Crowne Plaza didn’t agree to allow use of their building in that fashion. My next thought was to wonder if they didn’t agree with it, would they be upset that their respected business name and reputation was associated with such a message? The company was upset about it.

Therefore, my question to you is, if visibility and impact to the most people was important to you, why not choose a Federal building or an overpass, both of which “belong to the people”?

Milt: Better to skip that question.

Milt: I already answered it. Good location, near freeway with black backdrop making for high visibility.

Angela: Then let me ask it another way. If you had it to do over again, would you choose not to project on a building owned by a business?

Milt: Just tonight the message projected on Macy’s in the Lexington Mall was No One is Illegal. There is nothing sacred about a building owned by a business. Businesses have been sites of civil disobedience.

Angela: True, but haven’t buildings been chosen because they had a pony in that particular fight? Surely, you’d agree that innocent parties should not be dragged into a fight that wasn’t theirs.

Milt: I don’t know of any lasting damage done to the “innocent” party. In fact, the hotel got some free publicity. But beyond that, I see no reason to continue our discussion. It is clear to me that your interest is in the hotel and not on Trump’s policy proposals that will damage and even destroy lives. Wishing you the best as citizen journalist.

Angela: “No lasting damage?” “Free publicity?” Geez, Milton, are you kidding me? That’s the best you can do? We were just getting started.

If your protest is to bring change in an existing system to a way that would serve more people in a better way (which you claim it will), it would seem to me you’d take every opportunity you could to explain your methods first to open more ears to your message. But you cannot even do that? You give up so fast? Frankly, I am disappointed. Where’s your fighting spirit? Where’s your gumption?

End of report. The rest to follow is opinion. Mine.

Interesting point: Via phone Milt Tambor said he was unhappy with the TV news interviews because they were more concerned with his use of the dirty word “Fuck” where the little kids could see it. They didn’t want to hear his democratic socialist agenda messaging. I agreed with Milt that MSM missed the whole point of the situation. Unfortunately, so did Milt.

On DSA’s site they say they fight for reforms that empower working people. Yet the people working at businesses they use to project their messages are harmed by potentially causing bad feelings from the public, consumers, thus causing a drop in business and therefore not being able to pay a full staff, layoffs to follow. The DSA is working against working people. But that’s what socialists do, isn’t it? They claim to want to help “the little people” but push agendas that a long and well-documented history has shown will do more harm.

In any case, Tambor’s idea of protest sounds more like whining to me. Mr. Tambor, though agreeing to it when I explained how I’d ask questions of a type and in an order he might not be familiar with, decided not to continue the interview. Which, of course, made me think of this old episode of The Andy Griffith Show. See which character you can pick out as the socialist.