Not only can they not see my view, mine is an unknown unknown to them. That is, they didn’t know there could be another view other than the one they have. 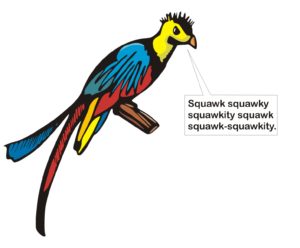 Parrots don’t have opinions of their own. Parrots repeat what they hear. Parrots don’t think. So when I hear parrots my finely tuned chucklehead radar kicks in. Just because my radar kicks in does not mean I open my mouth in response. Sometimes it’s just not worth it. Let’s say I’m at a party and…

…here comes the parrot my way just a-squawking some nonsense. Why, I just smile, sip my drink, and stuff a meatball in my mouth and mumble-mumble. After all, is the party really a time to start an argument or insult a fellow guest? I think not. Granted they believe I agree with them, and that silence at the party has later come back to bite me in the butt.

That is the price I am willing to pay to make the party a success. See how hard I work to get along with folks?

After I leave the party, though, well I can let the contrarian fly. As a person who has been forced to become Citizen Journalist because the Media Elite have become fancy parrots, I have found it to be my duty to expound.

That expounding, though, is only done after much research. Here’s how that works:

This Citizen Journalist knows she is working in the metaphorical wilderness, but the wilderness is not a bad place to be. There aren’t many distractions out there thus allowing the CJ to focus.

However, in the interests of full disclosure, if one were to ask this Citizen Journalist’s relatives about her contrarianism, they would say, “Oh, she got it from Granddaddy. Nuts don’t fall far from the tree, ya know.”