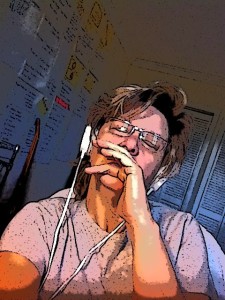 I wrote this blog about how music and God found itself in me. I think music is my spiritual journey. I’m a writer and I’ve written a lot, just a few things of which I sell. Words on the page are to be treated with respect even as I ask them to serve me. But music makes me move and hits me in places words do not. Now, add words to music and heck, I’m hit with a double buckshot of soaring and power.

When I was seven, I saw how adults wrote in what I would later come to know as cursive. But because I had not learned cursive’s code, I thought I could do it and scribbled what I thought was words. I showed it to my mother and said, “Read this.” When she said she could not, I was not happy. I went to school and learned the code.

Words on a page require that the reader be able to infuse meaning into them. Otherwise they are mere scribblings. But music is different. Music comes through the ears and is absorbed through the body. No reading or visual decoding required. It goes straight to the brain and all over it. (See an MRI of a brain listening to music. Here is Oliver Sachs’ brain on music.)

This song sung by Sammy Davis Jr. shows the places where music is found. Here are the lyrics to “The Birth of the Blues.”

And they nursed it
Yeah, rehearsed it
And then gave out the news
That the South Land
Gave birth to the blues

People everywhere can make music. Music is everywhere in all its dissonance, harmony, and resolution. And isn’t that life everywhere you find it?