Harridan or sex kitten, or something else? Throughout my life many have categorized me. This categorization always follows the same pattern. “You’re exactly this, Angela,” they say.

For various reasons — and for many years — I twisted myself into everything I wasn’t. Every now and then, when the real Angela would peek through, I would become often hated, always despised. Of course, the question was why? Why could these people show themselves for what they really were and I accepted them, but they could not do the same for me?

I struggled with that question for many years. Eventually — after watching and thinking and comparing all the many different types of friends from every background, religion, and economic strata you can name — I made an astounding discovery. The problem wasn’t me. The problem was them. Specifically…

…they were intolerant, limited in their ability to cope with differences of others. Especially when those differences made them have to think. Have to accept. Have to tolerate. In my case, these people did not accept or tolerate me. They cut me out of their lives to avoid thinking.

Even more astounding to me, and brought home with huge force during 2016 and on into 2017, is how many self-proclaimed tolerant people their are who aren’t so tolerant. Found on both sides of whatever aisle they happen to be standing, they make the assumption that because I am their friend, I agree with everything they believe.

Here’s the pressure these days.

Someone recently said our Facebook timelines must be vastly different. He asked if I what I wrote was a straw man. In other words, was I lying? Was I reporting as fact something about my timeline that didn’t really happen? My reply was that straw-man tactics were useless to me because the reality is so much more fun. “Fair enough,” he said.

The pressure to remain true to myself is even greater these days. When business is at stake especially. That was brought home to me today when I posted on Facebook about a show I was going to be performing in. It’s called marketing. Another performer, who until today was quite happy to be in my presence, posted he would be sure to be somewhere else where “real American values” will be.

And so yet another box-loving person will punish me for not having fit into the mold he’d chosen. Yet I can double-guar-OH!-damn-tee-ya that if I had said I would not come to his show simply because I disagreed with him, why the hounds of hell would be loosed.

Citizen Journalist at your service.

So I report. I ask questions. I dig. I don’t always get it right. But I don’t quit. And I don’t give up in my search for accuracy and truth. I do it through my writing. Articles. Songs. Books. Even what I write for customers must be true.

If that bothers anybody.
If that takes business away from me.
Then so be it. 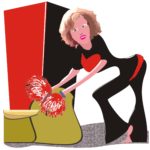