When I was thirteen and new to the community, I was invited to play a Saturday afternoon game of baseball with a group of kids. Bring your gloves. Bring your bats. Of course, I had none of my own. We were very poor. But I showed up willing to play gloveless in the outfield and chase and throw. I could borrow a bat when it came my turn to swing away. 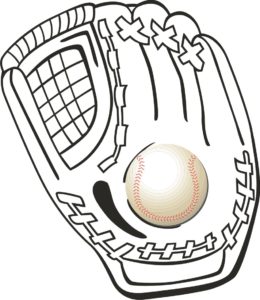 The young man who did the inviting seemed to be the mover and shaker behind divvying up the teams. He looked at me and, recognizing I brought no gear, decided it was best the new girl play on the other team, that is the team he wasn’t on, and it would be best to place her at first base.

No one questioned his decisions. Somebody hollered, “Righty or lefty?” When I finally realized they were talking to me, I managed to answer. A glove was thrown at me. I caught it and raised my eyebrows in question. Explanation: “You’ll need a glove to play first base.” Oh….

Never having played first base before, I had no clue how important that position was. Nevertheless, I stood in place, glove on my left hand and, as I often do, looked like I knew what I was doing. And, as is often the case, I was scared witless.

I was surrounded by kids, all pros on the field as evidenced by the fact each owned gloves and bats, who spoke the same language I’ve since learned is called Baseball. I was not a pro and I didn’t speak the lingo. Further I was farsighted in one eye, nearsighted in another, had astigmatism making it hard to judge angles and distance, and was not yet wearing glasses. Holy heckarama. What was I gonna do?

Of course the first batter up was Organizer Dude. He looked at me and sneered. It was clear I was going to die and OD would be the one to kill me in less than thirty seconds because we both knew the ball was coming my way.  He looked at the batter. The batter wound up and released. I didn’t even have time to scream before —

BAM! OD hit the ball straight at me. Instinctively raising the glove to my face to avoid death I — SMACK! — caught the ball. Reputation: MADE.

OD had thrown his bat down and begun to run when he realized he was out. Both teams — yes, even his own teammates —  went crazy wild with joy at the defeat of the giant before them. There was hope in Mudville after all. OD simply stared.

With a non-committal expression hiding total shock and surprise, I stared back at OD  and slowly removed the ball from the glove turning my attention to the pitcher and authoritatively chunking the ball straight at him. I could see the gears grinding to a halt in OD’s brain as he attempted to find out how he could have misjudged my talent so badly.

The rest of the game, no matter where I was put, not one ball came near me. Reputation intact! After the game was over several of the kids congratulated me with praise of my most awesome talent and back slaps, saying, “You’re the first to catch his balls!”

I never told Organizer Dude his assessment of my talent was accurate and that it was a complete and total accident the ball was caught by moi. Maybe he’ll see this article and wonder why it sounds familiar. Maybe he’ll get his long-lost confidence back. Maybe by writing this I have just saved a man’s life. Oh well, bridge under the water, right? We moved not long after anyway. I bet my legend lived on. I hope it did anyway; small victories and such as that.