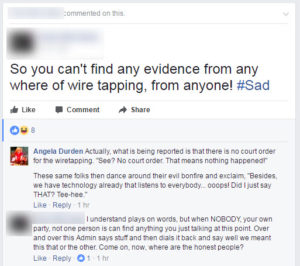 The big story of the day: Illegal Trump wiretapping. When you understand that most Republicans now in office are Democrats, then you will know why the Republicans say they can’t find any evidence of wiretapping. These are RINOs: Republicans in Name Only. They say there is no court order anywhere about Trump’s wiretapping! No kidding. That’s why it is illegal.

You know the old joke: How do you eat an elephant? Trump knows how. That was his strategy to get elected — and it worked. This new president has shed light on the real problem: It’s a fight over State rights and Constitutional rights with the RINOs and Dems on the same side. Using PC Politics disseminated through the university system via professors who do not tolerate any student disagreeing with them and who do, in point of fact, terrorize with threat of failing any who persist in disagreeing with them, the Feds slowly trained the populace to believe that Big Government Solves All Problems.

Furthermore, the powers-that-be want the populace to believe that You Are Too Stupid To Make Your Own Decisions. How did they make that happen? By federalizing the education system, for one. Folks have been brainwashed from Kindergarten all the way through to higher education to believe that Big Government is the solution. In this, the power hungry have been successful. You’ve heard the term “Nanny State”, right? That’s what we’ve got now. And it is ill serving everybody.

Of course, the question is why this push for Big Government? Simple. It’s the seeking of power consolidated among the few. Which leads, by the way, to dictatorships.

Look at MSM’s meltdown when Trump allowed other media outlets into press briefings. They claimed Trump was destroying journalists, when all he was doing was including more who had been shoved to the side by the major media players.

These same major media players, who have been proven through their own footage and their own print to be making up stories, own the airwaves and want power themselves.

Right now they’ve got it. Look at Facebook rolling out their own system of flagging what they have decided is Fake News. Look at Twitter that quietly shadow-bans any website they deem to be enemies of the Democrats.

Don’t get me started on the push against State rights. Some states have rolled over and let the Feds tickle their tummies and give them treats (think California) as long as they do what the Feds tell them. “Bacon!”, right?

How do you eat an elephant? 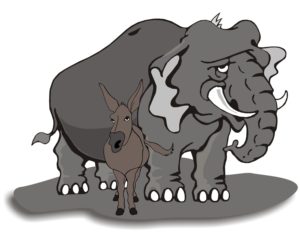 You know the old joke? “How do you eat an elephant? One bite at a time!” The gutting of the Constitution has been going on for over 50 years now. One. Small. Bite. At a time. It’s been successful because it was done in the name of “caring.”

Trump may have run as a Republican, but only because he saw what needed doing and made the decision not to fragment the election process any further.

Trump wanted to win simply to put the power back into the hands of the people. Trump believes the people are smart. He believes they can find solutions. He believes in the Constitution’s idea of small federal government. He also defends the Constitution and, by extension, the very rights that make these united states the ones everybody wants to come to. Terrorists (home-grown or imported) hate the US simply because its Constitution supports freedoms and terrorists hate freedom because they are all about them having control.

Trump sees what’s been happening. He knows the people who say they “care” are the very ones trying to destroy you. Trump is eating the elephant and its little donkey friend one bite at a time.

So, inflammatory headlines? Ignore them.

Ask yourself “Why this headline and why at this time?” Furthermore, read the whole story. Often, buried deep between “unnamed confidential sources say” and partial quotes taken out of context, is one sentence that puts the lie to the headline and the entire story.

And that, dear friend, is what is passes for journalism these days.