The peculiarness of my nature is too complicated to even try to explain it in a short blog post. Because of that peculiarness, however, I have always found it easy to sacrifice the getting of my needs and desires if someone with a greater need required my help, even if that sacrifice meant I got hurt.

If you want to understand that nature and how it played out over a lifetime, “Twinkle: a memoir” is a must-read. 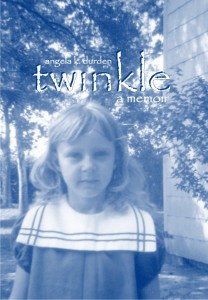 The first time I met someone who was like me was in 1968. I was a very young child watching the original airing of the popular sci-fi show Star Trek. I could not take my eyes off the screen as the episode “The Empath” played in our livingroom.

Backside nailed to the floor and eyes glued to the screen, I watched my life play out in allegory as my brothers and sister, mother and stepfather — each of whom I had sacrificed for in ways a child should not have to do — watched the episode blithely, nattering on, arguing inanities, wrestling on the floor, or playing with dollies. I was an alien in my own home.

Too painful, I buried the episode deep in a box, locked it tight, and stored it in a corner of my mind.

Fast forward to 2009. My marriage is ending. The huge question, though, is why?

How is it that I, Angela Marie Kell Durden, can walk away from a man, a marriage, a way of life even, that so desperately needed me to sacrifice myself for them?

I didn’t know. I just knew I couldn’t take it anymore.

Fast forward to 2015. Health issues long denied can no longer be ignored. These force me to understand that core layer in me in ways I had not. The box holding that Star Trek episode opened with the clarity of a hi-def, color-restored rerun.

I was Gem, taking the pain from others to save them even if it meant my dying.

And I finally became last no more.

My nature has not changed, but it can be controlled.

In an instant, I will sacrifice myself — if a life is on the line. After all, needs must.

But now this Empath no longer listens to others insisting on her sacrifice for what amounts to their willy-nilly want masquerading as their need.

Why should I sacrifice for them because they are lazy?

And now? I am last no more — making no apology or asking for permission to take care of myself.

This new modus operandi exerts itself in my personal as well as my business life. I’m enjoying the clarity…and the freedom to be me.

Wow. The things one discovers.