I was in downtown Atlanta at a live music venue to see and hear a few of my friends and fellow songwriters perform. The evening was good. At 11:40 PM, I walked two blocks to the parking lot and started my car.

Ewww. That did not sound good.

I knew I couldn’t stay in that parking lot as the nighttime panhandlers had come out of shadows and were already circling, so I put it in drive and proceeded down the street. About half a mile away is a Krispy Kreme Doughnut Factory — yes, the HOT sign was on. Their parking lot is well lit. I pull in. Shut down the car. Open the hood and…yeah…I was concerned.

I called AAA and proceeded to settle in for the tow-truck wait. Thank goodness I had a blanket in my car because the evening turned off chilly.

The Friday night was busy for the tow truck folks and two hours later my guy arrived. The first five miles are covered under my AAA policy, but the last mile I had to pay for. In cash. Not a problem. Hey, dude? Ya got change for a twenty?

No. He didn’t. No problem, I said, because for the last two hours I had been watching the doughnut lovers of the city circle the building en masse. Since the doors were locked and the drive thru was all that was available, I waited for a car to move from in front of the window, nodded to the car behind him to pretty please don’t run me over, and stepped to the window.

That’s when I noticed the two girls in the car. They were staring at me and giggling. Trying to hide their giggling, of course, but it’s kind of hard to hide the cell phone taking a picture of a woman in black pants, red purse, hair blowing in the wild and crazy wind, and wrapped in a gray-and-fleece blanket against the cold.

I thought, “Geez. I’m sure I don’t look like a homeless person. I mean, I just had been to a club and folks seemed to think I looked A-Okay. So, why oh why, would they be giggling?”

And that’s when it hit me.

They were really just whistling past the graveyard.

Yes, they were looking into their future.

You see, they were just old enough to drive themselves into the Big ATL and go to a club and order alcohol.

We all know what they were thinking. We’ve thought it ourselves.

Blah, blah, blah. We were so full of crap…just like all young folks are. 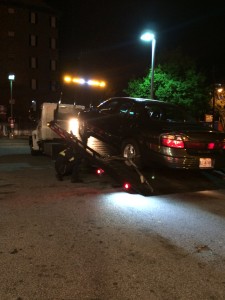 So, I get in the tow truck with the driver. He tells me he’s thirty-one, married, kids. Now he’s working late nights and nursing a broken ankle (he was limping quite badly), but hey he’s on the mend now after being laid up for several months trying to get better so he can go back to his long haul job wherein he covers the lower 48 bringing stuff to the likes of you and me. For a song I wrote about truckers, CLICK HERE.

How’d he get his ankle broken? Simple, he says. He did what he always did when he was having a good time with his kids and friends: He jumped off the porch. It wasn’t a high porch. Just three steps down.

“But,” he said, “I found out the hard way my body did not keep up with my mind’s opinion of my physical abilities.”

He waved a hand around at all the young people going by, certain parts of which were in prime condition; lots of male muscles and female peaches on parade. And he said, “I used to be like that. Never thinking about taking care of myself. God. What was I thinking?”

He put the truck in gear, the diesel gave a nice growl, and we were on the road.

But to the two young girls who pulled forward after getting their doughnuts and stopped and stared some more as the car was being loaded, I say, “Go ahead and laugh. Really, your giggles make no never mind to me. I know you’re whistling past your graveyard because you were looking at your future and you were scared.”