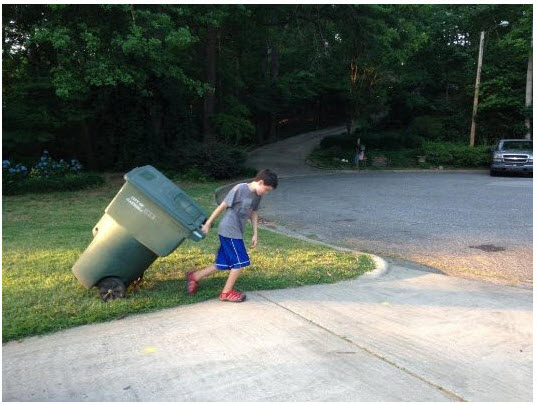 Seems a boy had started a service where for a mere 25¢ he would haul your trashcan to the curb on trash day. Neighbors were eating it up and they gladly paid. The boy’s father shared this picture on Linkedin of his 11-year-old son working his business. He was proud. The boy was proud. The neighbors were proud. And the folks on that bastion of business were proud for the boy, too, sending many praises his way.

If that was the end of the story, it would be a good one. But it isn’t.

Notice she first implies the dad and boy are greedy because she chides them when she says “life is not about money” as if the boy and his father thought it was. Then she pulled the old “sorry” bit that when said like that means “I’m right. You’re wrong. And because you made me have to say something, you will begin your penance now, you bad person you.” CahRACK! CahRACK! “Feel my wrath!”

Then, of course, like a good little whip-wielding Socialist, she has the solution for the whole thing. “Learn him to communicate,” she commands.

Don’t you just love that? “Learn him to communicate.” Well, I could not hold myself back any longer. Here is a screen snip of my answer to her: 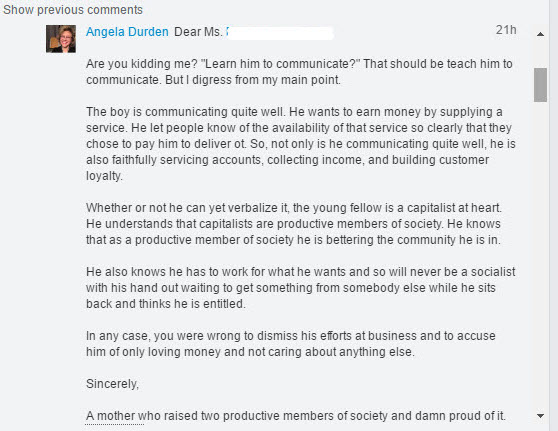 Please note: I did not fall in line and become one of the great unwashed P.C. Whipped when she uttered her commands.

But my reply caused another woman to take exception to it. She then proceeded to accuse me of being all for slavery because he was only being paid 25¢ per can and wasn’t in school. As if the boy can’t do both activities in one day. Oh, the shame I was meant to feel when she invoked slavery, a highly charged word meant to make me realize I am so bad. I do not know what ethnicity she is as her profile picture is an egghead. But it doesn’t matter because she obviously believes I’m invoking white privilege.

Then a man in Israel said:

So this man is trying to deprive the boy of the pride of earning money from an idea he successfully executed, and for what good reason? That the boy’s wasting time? That he should gather as much knowledge now as he can because this is his only chance seeing as how once he’s all grown up he’ll never be able to learn again?

Of course, I had to ask myself, “What are these people doing on a business site if they don’t believe in business?” These people are everywhere. They never follow the logical path to where their caring goes. Everything they do is meant to punish, destroy, and weaken a decent human being’s need to feel responsible for himself and others.

The reason they have gotten so bold is because decent folks like us simply laughed and ignored them. “They’ll go away,” we said to ourselves.

So, while I do not think that my comments alone to these people will shut them the hell up, when a lot of us call them on it, then they will start slowing down because one thing we know about good, little, obedient socialist P.C. Dominatrices is this: They don’t like somebody cracking a whip their way.

In any case, I didn’t feel any shame for speaking up for kids anywhere who want to earn their own money, and I still don’t feel any shame. It is obvious these people have never heard of that great worldwide slave of evil stockholders. You remember them, right? Waste Management? 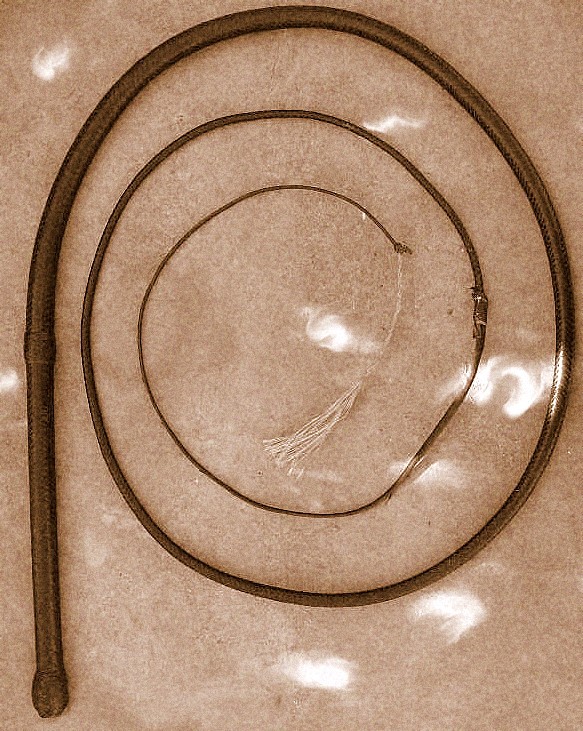