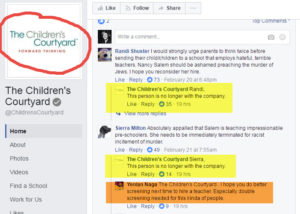 Names, Tags, Numbers, Labels: Albert Hammond wrote the song with that title. [A YouTube video of Hammond singing it live is at the end. You’ll like it.] The Association also covered the song beautifully. I posted a tweet about one situation in which names and labels got a daycare chain in Texas in trouble. But was it really the local branch’s fault? Methinks not. 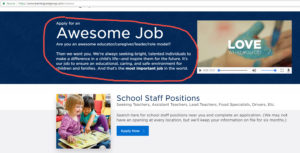 The Children’s Courtyard is owned and operated by Learning Care Group, the second largest for-profit early childhood educator in North America. According to their website, the company has over 18 thousand employees in 900 U.S.-based schools serving more than 130 thousand children from six weeks to 13 years. Hiring is handled at the corporate level.

And that is how Nancy Salem — a hater of Jews (a home-grown radical Islamist Muslim?) — got through the corporate hiring process in order to teach little kiddies of the good folks in Arlington, Texas. You see, Salem was more than likely hired because of the need for the company to make their numbers: The Diversity Numbers the Liberals in the Federal Gubment — in their infinite wisdom — have foisted upon businesses with 15 or more employees. [Scroll down to read more.]

So Mizz Nancy shows up with her headscarf and corporate HR people immediately see a tag, a label, a number. “She fits these categories — tick-tick-tick. Hired!”

Obviously the background check didn’t happen. I mean, these days who doesn’t look at Twitter and Facebook and Instagram to find out if they’re dating or hiring a nut, right?

Isn’t everyone who wants to get hired and get lai— errr…entangeled romantically — told to watch what they put on their social media profiles because everybody is checking up on you?

Leave it to your Citizen Journalist to say it:

That is obviously an urban legend.

HR folks aren’t checking social media. If they were, how could they have missed the radical incitement of Nancy Salem’s “Let’s kill all the Jews” beliefs?