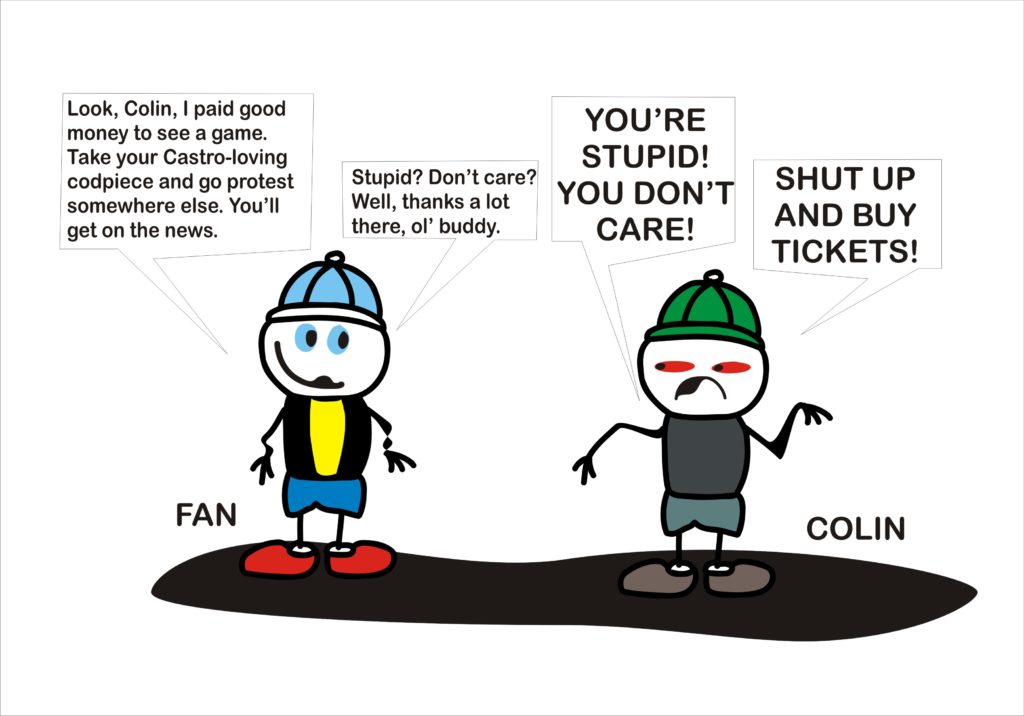 Is NFL game viewership down? Yes. To hear some NFL spokespersons and a couple of networks spin it, it’s a typical down cycle and they were expecting it.  The Wall Street Journal reported other views:

“We’re scratching our heads,” said Andy Donchin, a media buyer at Amplifi US, an ad-buying unit of Dentsu Aegis Network, whose clients include General Motors Co. “We cannot pinpoint any specific reason why the numbers are down. It is probably being caused by a confluence of events.” One reason often cited is the election. The Sept. 26 debate between Hillary Clinton and Donald Trump drew 84 million viewers, cutting into ESPN’s “Monday Night Football.” While this Sunday’s New York Giants versus Green Bay Packers matchup on NBC will probably fare better, its ratings likely will be impacted by the head-to-head competition with the second presidential debate. Rating declines for Sunday afternoon aren’t nearly as steep as the prime-time telecasts, but Fox and CBS are down, while cable news ratings are up.

Yeah, right. We all believe that. (Cue the wildly dripping cynicism.) Ratings show what the public thinks and the public does not like a person earning millions to insult the very system that allowed him to earn those millions then turn around and celebrate systems that kill thousands upon thousands of innocent citizens. From Forbes Mike Ozanian: “The networks that televise the games barely mention the protests anymore. But the fans have not forgotten.” Asked by Brandon Katz: “Will ratings sink so low that NFL commissioner Roger Goodell is forced to get involved?” Let’s take a look at the situation….

Does Colin, or any other player in the NFL, have a right to protest? Yes, and anyone who denies that right is a socialist communist dictator wannabe who must give me his house because I want it. But the big question is do the players have a right to protest at the game? That’s a different question. The answer here is yes and no. Some argue contracts with their players control them so tightly that civil liberties granted by the Constitution and the Bill of Rights to every citizen are taken away.

Upon hearing that argument, I decided to read an NFL contract. You can read one here: A real NFL Contract found on the SEC website.

Besides all the language that promises and takeths away residual income, what did I find? Why I found nothing that takes away civil liberties. Instead there was typical language that says:

See? Civil liberties intact because these hiring conditions were agreed upon before being signed. It’s not like Colin didn’t know where and when he could stage a protest. (I wrote about his youthful vigor here.)

But even that isn’t the biggest story here. Look at the list of nine above and remember this: Civil protest is not singled out. Any action that sullies the brand will be sanctioned. Got that in your head? According to a database* of 837 incidents from 2000 to 2016, the highlights are:

Civil disobedience is noble. Murder is not.
Fans ignore the latter and roast him for the former.
Is it any wonder Colin is confused at the response he’s getting from fans?

So the big question is: Do ticket sales and network viewership go down when these other types of sullying go on? No, they do not. And what does that say about us, America? Huh?

*These are arrests, charges and citations of NFL players for crimes more serious than common traffic violations. Almost all of the players belonged to an NFL roster at the time of the incident. In rare cases, a free agent is included only if that player later signs with an NFL team. The data comes from media reports and public records. It cannot be considered fully complete because records of some player arrests might not have been found for various reasons, including lack of media coverage or accessible public records. Many resolutions to these cases also are pending or could not be immediately found. The database was conceived and created by sports writer Brent Schrotenboer, who can be reached at bschrotenb@usatoday.com. Please contact him with any updates or inquiries.