As you can see in the above Google Search screenshot, it is popular in this Madison Avenue, sound-bite-driven world — where only those at the top, top, top of their game are used in ad campaigns — to tout a belief in no limits. Why, just take a look at all those folks with no arms and legs. See them racing down the ski slope? Running on the beach? Jumping hurdles? Winning, winning, winning? And how did they do that?

That’s right! They don’t believe in limitations. Those ads imply other mortals out there that say we can’t do those things, why we’re just stupid, lazy, don’t want “It” bad enough, or are willing to settle for mediocrity. No matter how many times we bump up against limitations, the real problem is our thinking, they say.

A popularly quoted Bible scripture, often attributed to Shakespeare, says “Thinking makes it so.” Never mind that the scripture has nothing to do with physical limits, it sure sounds good and Madison Avenue — never one to turn down a catchy phrase — ran with it. Which should give us a little hope: Somebody up there on the Ave reads their Bible. Sweet. However, Liberals believed Hillary would win the 2016 presidential race…

…based on nothing more than feelings built on misleading advertisements punched up by catchy phrases (I’m With Her, and Stronger Together, whatever that meant). Look where it got them. If you can imagine it, say the gurus of feel-good, you can do it. Therefore, according to Madison Avenue, Hillary lost and Trump won because one did not believe enough and one believed plenty.

Think of all those who supported Ol’ Hill yet helped her lose because they did not listen to Madison Avenue and let their thinking get slack. Those:

Hollywood A-Lister purveyors of box-office magic and the media elite pundits with hotlines to movers and shakers.

Most elected Republicans, other RINOs, 99.5% of Democrats, and — according to my timeline feeds at least — 95% of user on Facebook and Twitter.

Of course Hillary lost because they believed in no limits. She and all her acolytes, worshipers, followers, including reactivated radicalized feminists and every one of the pussy-whipped men really, really, really, really, really, really believed she could not lose. We know this because of the dazed and confused stares on each crying face. That same thinking made them want a recount, too — which also didn’t turn out like they thought it would causing —

Throwing of hissy fits!
Gnashing of teeth.
Pass along to your representatives professionally-written letters of demand, copied and signed by you.

Hurling of insults!
Racists are running the US!
Blue Lives? Nobody’s born with blue skin.
White males, listen up: You suck.

And whining heard around the world.
All our hard work is for naught!
ISIS lives matter, too!
Redneck racist white males, we lost and it’s ALL YOUR FAULT!

Because they did not believe in no limits, all the above missed — and continue to miss — what is actually happening: A line chipped in cement by those who are sickened and beyond tired of assaults on the Constitution of the United States and the Bill of Rights, eroding the very foundation upon which this country operates as the stabilizing influence to the world. 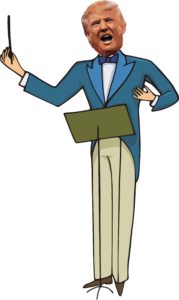 “The Hammer” believed in limitations. He knew he had them. He planned on how to deal with them. Like a smart orchestra conductor working in the wild of the wilderness, he took many moving parts and turned out a great symphony against all the odds.

And what have Liberals done since Trump won fair and square? From a week after his election, they’ve complained that he hadn’t yet fulfilled all his campaign promises.

You see how the illusion of no limits just doesn’t work out so well?