In the name of tough love, certain radical feminists have rained down curses upon Ivanka Trump’s business by asking for a boycott of her clothing line wherever it is sold. Of course, the New Yorker jumped all over that. Hey, it’s all about selling magazines and papers, or getting eyeballs online. I get it.

Then Sir Baratunde Thurston decided to weigh in with what I saw as a thorough wasting of my valuable Facebook time. Sir Baratunde is a writer whose columns I always read — and valued — in Fast Company, a business magazine. So, I made a quick reply on that most egalitarian of social media platforms as ever existed. You can see it in the below screenshot. And you want to know what happened?

Oh. My. Gosh! Who replied but the one and only Sir Baratunde, a business media personality, well known, and paid massive amounts of money to have his business wisdom shared with readers everywhere. See the screenshot! I’m famous. I promise I’ll never ever, ever, ever-ever wash my face(book) again since he touched it. 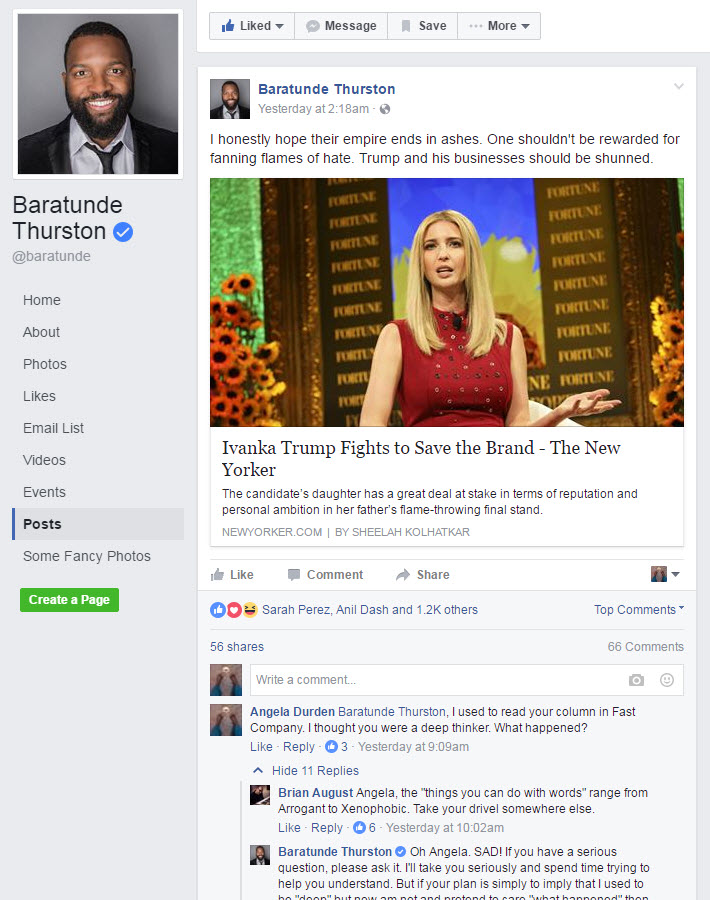 Okay. I’m kidding. After this post, I’ll probably not give the interaction another bit of thought. I’m only writing it to document a process in the power of the Liberals and Fake Conservatives (RINOs) to convince even previous deep thinkers to change their mind. You know, as part of historical archives somebody somewhere will dig up in about three-hundred years. I’m doing my part.

As you can see from my comment, which in any universe would be considered an opinion of his opinion, I asked Sir Baratunde a question, namely “What happened?” to his ability to think deeply. 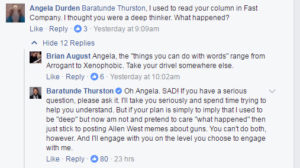 Of course, his reply was that if I had a serious question he would be happy to answer it.

I was serious about what I asked.

Of course I had to reply to him, and here is that reply, the text of which I copied and pasted here:

Baratunde Thurston, your comment as listed above said, “I honestly hope their empire ends in ashes. One shouldn’t be rewarded for fanning flames of hate. Trump and his businesses should be shunned.”

My current opinion of you is simply a business decision on my part, and a customer service issue for you. My time is valuable to me. I seek information. You no longer have any valuable to me. I no longer will spend time on the deliberate seeking of your knowledge, or buying any product you may be selling that involves a repackage of your opinion.

You can have any opinion you want about stuff, and I respect your right to have it — and sell it in any way you please. I, too have a right to my opinion and I stated it. I enjoyed your columns because of your take on business. I knew nothing about you, had never heard of you, before I subscribed to Fast Company and saw your column.

Yet your column in Fast Company seemed to have a witty balance and a way of making me think. I often laughed out loud, shared it with friends and colleagues, and even mentioned a quote of yours in something I wrote. You’re an awesome writer about business. You’re not so good as a political pundit.

That is why this statement from you caught my attention. That you completely condemn to ashes the livelihoods of thousands upon thousands of people for an action that they are not doing, that Mr. Trump himself has not done and is only accused of doing by Democrats actually doing it, namely the “fanning flames of hate.”

That is when I said to myself, “This man obviously has either drank the Liberal Kool-Aid or is trying to bed a Radical Feminist and is desperate [sic] making brownie points. In any case, he no longer has anything to offer me.”

Like I say, this is just a customer service thing for you and a business decision for me.

Regular readers of my column will be happy to note that one of Sir Baratunde’s acolytes even went to my website to check me out. By way of proof he visited my site, he quoted my tagline: “Oh, the things I can do with words.”

Brian August is his name. Thanks for the shout-out, dude.

Brian is a great little acolyte. He was the first to pop up with an insulting opinion about me all so his master didn’t have to fight his own battle. “See, Master, I’m a good little soldier. See, I threw two barbs — TWO! — at that…that…that female meanie!” Let’s all give him two thumbs-up, okay? Ready? Go! (I hope Brian sees all our positive affirmation of his effort on behalf of his master.)

Poor Brian probably couldn’t believe I said something to his master that was not worshipful. I know Brian didn’t read anything I wrote. Then again, maybe he did, but reading it through the Media Elite’s prism, he thought I was arrogant and xenophobic. I am not a xenophobe. I can be arrogant, so I’ll give Brian that. Maybe he talked to my ex? Maybe he studied my use of the Oxford Comma? See how fair and balanced I am? Hey, good job on the deep research there, Brian.

However, let’s talk about Brian’s arrogant tag for a moment. I call that into question. You see, Liberals aren’t used to other people having a thought other than the ones they’ve been given to believe and spout. Therefore I believe the word Brian was really searching for was opinionated.

Arrogant definition: “Having or revealing an exaggerated sense of one’s own importance or abilities.” By way of use in a sentence example: “He is arrogant and opinionated.”

See? Two different things. Then I thought, “Why, let’s look up opinionated?” It is this: “Conceitedly assertive and dogmatic in one’s opinions.”

I reject Brian’s opinionated opinion of me as I never write about anything until I’ve argued and thoroughly researched the finer points of the situation to determine if I am wrong. Further, I am not conceited. I am assertive, but that comes from my Daddy’s side of the family. Lots of uncles who were Marines. And aunts who were teachers back when that meant not spouting a party agenda but actually teaching subject matter.

See, I know I can be wrong in my thought processes! I admit it. When I am wrong in the basis for my assumptions, I then write something else entirely. Again, you see how fair and balanced I am?

Sir Baratunde missed a great opportunity to defend his statement. You see, if he was as good at business as he says he is, then he would have immediately recognized an opportunity to salvage a valued customer, a reader of his words. But he didn’t. He immediately insulted me by stating the question I asked was not serious and therefore not worth the expenditure of his great and awesome brain power to answer. 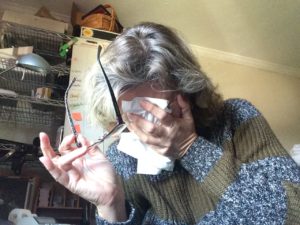 The dream has died hard as you can see from my obvious grief in this photo.