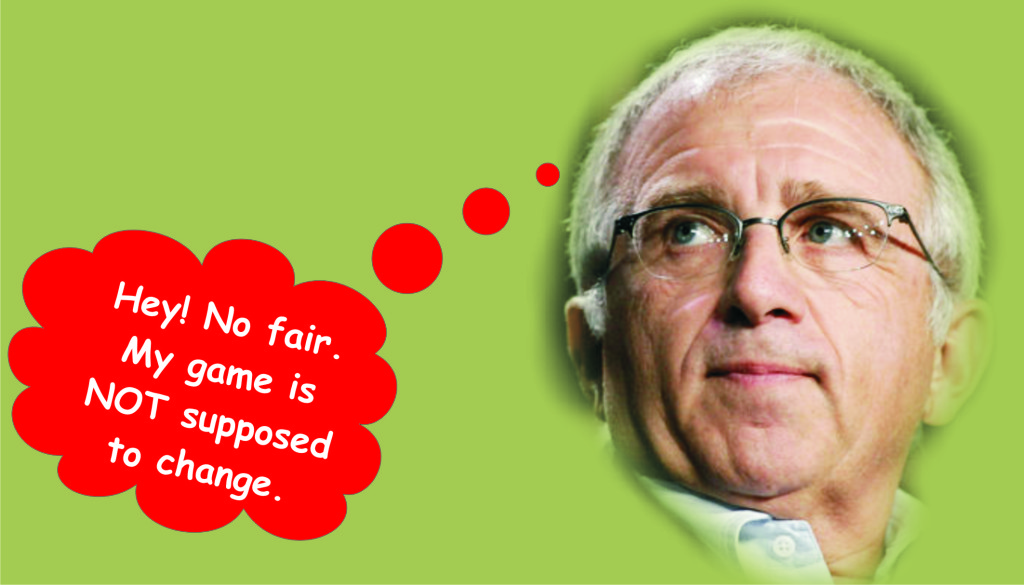 Now, I have to tell you: Sir Irving is not a stupid man. Therefore, upon reading his letter I had to conclude…sorry to say this, but…he was whining about the changing business landscape.

Sir Irving is a legend. And like many who make their mark with a system they exploited profitably because they know it well — or invented it, Irving is complaining because the game has changed, and cursing the fact that things no longer work like he’s used to.

Irving Azoff is part of the Old Guard fighting tooth and nail to protect his kingdom. I can’t blame him. It’s only natural he should do that. But now he’s out of his depth, cannot figure out what’s going on, and just wants things to be like they always used to be. Again, only natural. Nobody likes change.

If Irving just wanted to, he could be a wise man on the mountain by becoming part of the New Music Business that is being led by DIY/Indies who are opting out of the Old Way Of Doing Things [O.W.O.D.T.] because the O.W.O.D.T. was — and still is — cheating the songwriters and artists blind.

On April 30, 2016, I wrote this open letter to YouTube, wherein I acknowledged their past mistakes, but thanked them for repairing those mistakes, learning from them, moving with the speed of the market, with the goal and intent of everybody winning.

Google, owner of YouTube, is not doing everything right, but they and I, along with others, see where the power of technology is going. I believe Google is already a powerful part of the equation to monetizing one’s beloved and heart-charged art.

That YouTube is working so well while having to function within a framework of government regulation written to serve the O.W.O.D.T., only goes to show you how much thought they are putting into this.

When creators add to their YouTube deployment these parts of the business asoutlined here in this article, then the DIY/Indies will bring to the table the most important part of the solution to protecting and defending the rights to their songs: Documentation of source ownership data and the absolute control of it to serve their business goals.

I have advice for Sir Irving. I hope he takes it to heart because it cost me a lot of money to learn it. There are four ways to approach a problem. One can:

I’m one of those reversing it by inventing easy-to-use technology that systemizes necessary processes that folks in the business — like you, Sir Irving — have always known about but failed to tell songwriters.

Not that it is your place to educate your competitors — and that’s what the DIY/Indies are to you now, competitors — because that would be stupid, and you’re not stupid.

But to continue to support a worldwide system that is out of control, has no compunction about…well, let’s just say it isn’t pretty how they manipulate lawmakers, write terms of service with all the slickness of a weasel going through water, and treat metadata as their personal plaything…

Even artists and bands you manage are already making changes in how they do business because they see what’s happening here at the grassroots level where all system changes begin. They might not be telling you what they’re planning, but you should listen to them, then come to the light together.

In many instances, whining is just another way of asking for help and more information. So, here’s what I’m willing to do for you, Sir Irving:

I will be more than happy to have a chat — while waiving my regular two-hour consultancy fee, mind (that is a $1500 value, by the by) — and bring you up to speed about what’s really going on. I’m here to help you…

…because that’s how I roll.