Sly Stone has a way with words. Anyone who can use language like Sly does to conceptualize a solution to a problem has my undying respect. Sly formed the first racially-mixed band. His smiling, whirling mass of flashing color danced in the aisles on The Ed Sullivan Show. He is talented beyond measure. And he was royally cheated out of his rightfully due writer royalties for which lawsuits ensued almost forty years later.

Besides the systemic and requisite problems bands of that era faced — sex, drugs, and rock-and-roll do take their tolls — Sly constantly got pressure from the Black Panthers to make his message more militant. After all, their “All power to the people” lacked punch and they needed a song they could sing when they marched. Of course, as good Socialists, the Panthers used force and intimidation as their first go-to leverages. But what was worse, and what all artists should be upset about, was the Black Panthers insistance Sly replace his white band members with blacks. Now, messaging and getting paid to rewrite marching slogans aside, artistry is where you find it. To define artistry by a single indicator is to deprive it of the love of the sun it so needs.

Snowflakes of Terrorism, including Black Panthers and radical feminists and other misogynists, are always the first to scream when of their own gets fired. Never mind the drummer had bad timing. Never mind the guitarist kept messing up the chord progression. Never mind the vocalist couldn’t remember the lyrics. Never mind the surgeon has lost fifteen patients in a year. Never mind the mechanic doesn’t know a spark plug from an ignition switch. Never mind the server makes you ask for a damn fork if you think you need one to eat your spaghetti.

No, say the socialist terrorists, they were not fired for incompetence. How dare you imply such, they say. They say firing ensued because of hate for their Narrowly Defined Category.

They scream because their agenda is not who can do the job best. No. And don’t be fooled.

Their agenda is about power. They want it. They’re gonna get it. They will take it. And they cannot wait to will wield it over the heads of those who stand in their way. Much like ISIS and Dear Leader and Adolph and Fidel and Gloria and Bella.

But you see, Sly Stone was not a terrorist. He was a regular guy who wanted everybody to get along. Look at some of his quotes in this screenshot from BrainyQuote.com: 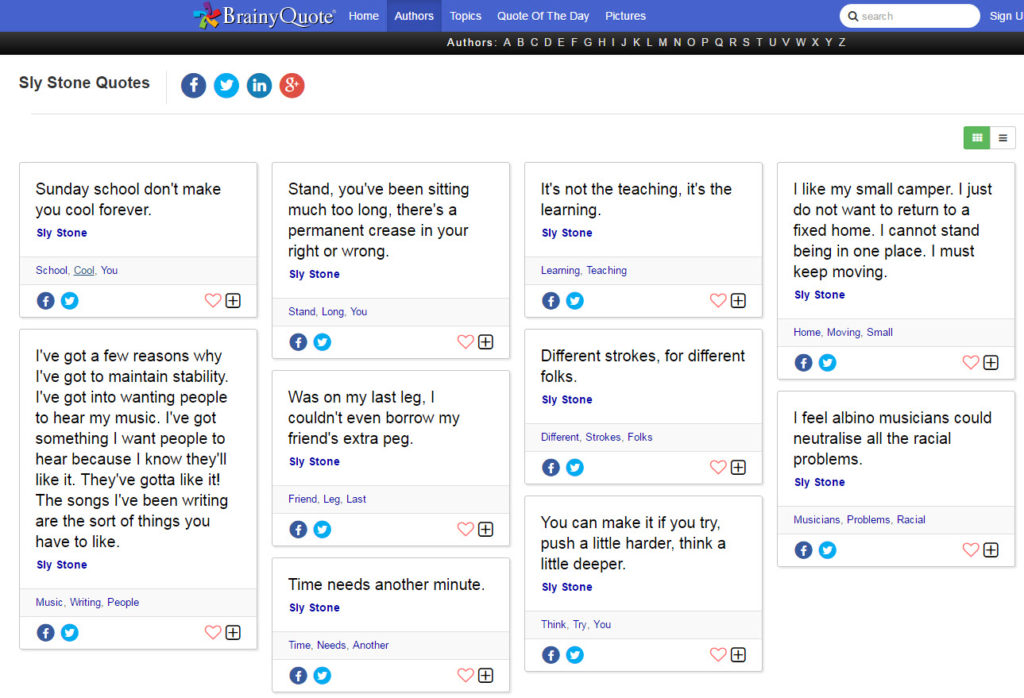 These are Man In The Street quotes. Most people think like that. There is humor and pathos and insight into humor nature. These things know no color or gender. Sly would be a great guy to perform at Trump’s inauguration.

Hang tight! I can hear my Snowflake readers freaking the hell out. Let’s let them catch their breath before we move on. Let’s let this little fellow do the tick-tock countdown for us while we wait.

Doesn’t look like my Snowflake readers are going to get that breath anytime soon, so let’s just move on, shall we? Back to Sly playing at Trump’s inauguration: I think it is a great idea.

Sly is tired of being cheated.
Sly doesn’t like being bullied by terrorists.
Sly doesn’t want to be told to fit a mold defined by others.
Sly has a distinctive personality and look.
Sly has a voice for the ages.
Sly can turn a phrase on its ear.
Sly believes in high-quality artistry.
Sly can put on a memorable show.
Sly is iconic.
Go, Sly!