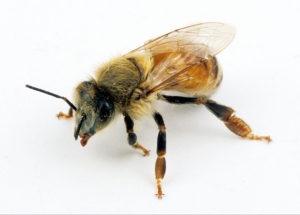 The old worker bee landed on her back in the pool almost in front of me. Her little legs were kicking but her wings were stuck to the water and there was nothing she could do to save herself. I was in the middle of doing my morning laps but stopped my exercise and saved her little stinger from drowning. Using a leaf to scoop, I placed her on the edge of the pool and turned her, wings up. Her color was not the vibrant depth you would expect from a worker bee. Her color was a very pale, almost sickly, yellow. She went through various contortions in what I thought was a drying-off routine. First her legs were shaken, then her wings, of which one seemed to be missing but then I discovered it was stuck to her body. She next did a headstand (maybe to drain the water from the map in her head so she could fly home?), but again landing on her back and kicking her legs into the air.

I turned her again, only to watch more of the same antics that again flipped her upside down. Again I turned her over. I blew my warm breath across her and she seemed to like that. No, I cannot say for certain she enjoyed it, but she didn’t flinch from it, thus my assumption. She got still and I continued with my laps, checking on her periodically. She began shaking, her legs barely holding her above the concrete pad, until finally after two more laps I saw she was slumped on her legs, head turned sideways, and only one wing barely twitching. She was dying. Two more laps and she was gone.

I pushed her little carcass near the ant trail. By day’s end she’ll have been reused to infuse life in a colony below ground. It’s called the circle of life.