I am not a liberal and Twitter doesn’t like it. Twitter: Why the shadow-banning? Highly suspected since January of 2017, I had nothing concrete to show for it except that fewer and fewer were interacting with me; my follower count has stayed level for about two years. If one joins, one leaves. Very weird. (Dilbert comic strip creator Scott Adams writes about his shadow-banning here.)

Around mid-April 2017, I tagged the U.S. Prez in a tweet along with three others, one being my friend who lives near me. She came over and I asked if she saw the tweet I tagged her in. She was excited and pulled up her Twitter account on her smart phone. That tweet wasn’t there and she got no notification she was mentioned. So I went to my Twitter account to show her, and there I saw my tweet but without her, the president, or the other two mentioned.

So, I retweeted it, tagging her again. This time it showed up in her feed. This morning I tweeted a link from MSN. Here’s the Twitter screenshot. Notice where I’ve circled who is “in this picture”? You will see only one name. 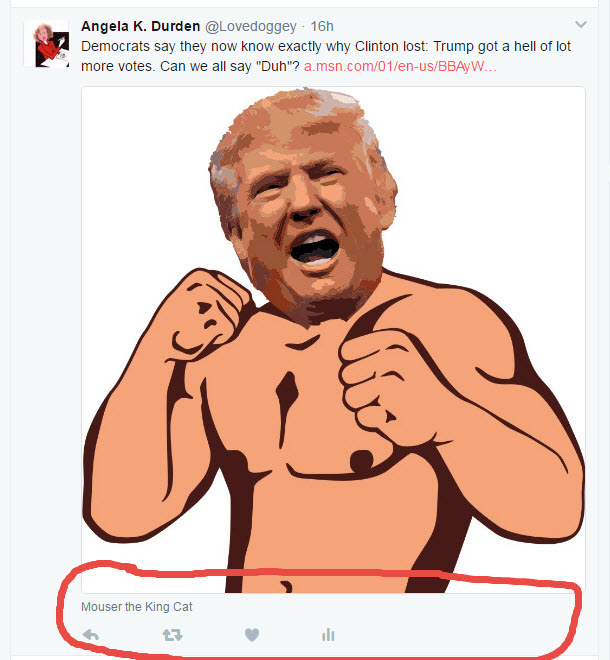 Do you see Ecklebob Chiselfritz? Donald Trump? Or JBaileysMom? No, you do not. Now what in the hell reason would Twitter have for deleting my tags? Tags of people who are using their service? Tags of people I follow and/or who follow me?

So, Twitter? Whatcha got to say for yourself, huh? Has anybody on your leadership team been promised a big position when the Socialist Party takes over? Has Obama or Mizz Hill visited your offices lately? Have you been threatened and caved under pressure?

I asked this and more back in January 2016 when I wrote this blog. I never heard back from them. Of course, Twitter’s own algorithm may have kept them from seeing it when I tagged them in the tweet.

In any case, if you believe in the Constitution of the U.S. and the Bill of Rights and think the election of Trump means you can let your guard down, you are mistaken.

So, #standfirm and #persevere because the fight is only going to get dirtier.