Men who take stiffy-inducing drugs and then get melanoma can now sue. It’s true. The ads are all over TV. The latest reported side effect linked to Viagra (and other of those ED-types including Cialis) is an increased risk for melanoma. Men who take these for any of its recommended uses have legal rights if they develop this deadly skin cancer.

So if the everlasting-stiffy and the loss of vision and hearing don’t kill you, hey, that innocuous black spot will. “What a way to go” now has new meaning.

What caught my eye in this announcement was that if a man takes these drugs for any other use than what is recommended, then he cannot sue. The big question here is: What are the unrecommended uses for Viagra? So I researched it. I couldn’t find any unrecommended uses other than the long list of medicines one should not use at the same time. What I did find is other reasons to use Viagra that may or may not involve seeking an uptick in the old whangdoodle.

It seems that conditions being assessed for treatment with Viagra include heart failure, premature ejaculation, diabetes symptoms, multiple sclerosis, pain, chronic pelvic pain, memory loss, Reynaud’s phenomenon, strokes, and premature birth situations. One of the big complications that babies can experience is called pulmonary hypertension, which occurs when it’s too hard for the heart to pump blood through their lungs. Sildenafil (Viagra) works in a way to relax the lungs so that the heart does not have to work so hard. I love it.

But I’m more interested in other uses my research found.

It has been reported that in Egypt Viagra has been used to save unconsummated marriages. I call BS on this: The statement seems fake.

First, on what is this statement based? Statistics? From where? Research? By whom? Who in that country has the guts to go against the religious fanatics running everything? Nobody, that’s who.

Second, the current Egyptian man does not admit anything wrong about himself. If he can’t get it up, why, it’s the woman’s fault and he can divorce her (but keep the dowry), flog her, or have her killed then marry a little girl who will tickle his fancy more and maybe he can get it up then. But he’d never take a pill — much less be part of a survey or research group documenting the problem, or go to a doctor and admit the problem — because lack of woody isn’t his fault.

He’s a man. He’s a man’s man. He’s got parts that work like a man’s parts should work and don’t you think otherwise or he’ll rain down curses upon your head faster than his bullet will reach the back of your head as you kneel on a cliff.

In Argentina, Viagra is the new therapy for jet lag. But how does it work? (The jokes write themselves here, folks.) Does it keep you up before or after the flight? What if you stay awake for longer than four hours? Do you call your doctor? What if you’re mid-flight? What if you stay awake everlastingly? And if Viagra is taken expressly for jet lag, does that mean men won’t get a stiffy? And if women take Viagra for jet lag, what happens to them? I’m all for the mythical Mile High Club, but really this is just too much.

Politically correct environmentalists should be extremely interested in this next usage: Allowing murdered flowers to look alive much longer.

According to a story on Fox12 Oregon, “The next time you want to make your flowers last a little longer, consider dropping a bit of Viagra into the vase….According to the British Medical Journal, researchers in Israel and Australia have found that the little blue pill is not only effective at treating male impotence, but also can be used to double the shelf live [sic] of cut flowers….They found that as little as one milligram of Viagra dissolved in a solution was enough to make two vases of cut flowers stay fresh almost a week longer than normal.”

I can’t make this stuff up. At least the flowers aren’t going to live long enough to get melanoma, but what about all those folks with jet lag? 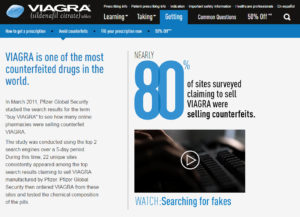 Of course, like all successful product launches, Viagra has been plagued by counterfeit knockoffs. The pun is terrible, I know, but it’s the right word to use here.